‘Amy’ is currently moving away from selling sex and has been talking with the Beyond Support team over the phone for several months. Recently, she had this to say:

I’ve never wallowed but in another sense I was holding onto that problem and that life. When you can realise that you are a victim of someone else’s behaviour, but you don’t have to be a victim to your own choices, that’s when you can cross over from becoming a victim and become a survivor. As harsh as it may sound, when the moment comes that you are able to make a choice, make one that is right for you. We cannot blame ourselves for what happened to us, but we can take control of our future. Don’t do something if you are not happy and if you are happy with your circumstances, then own it! 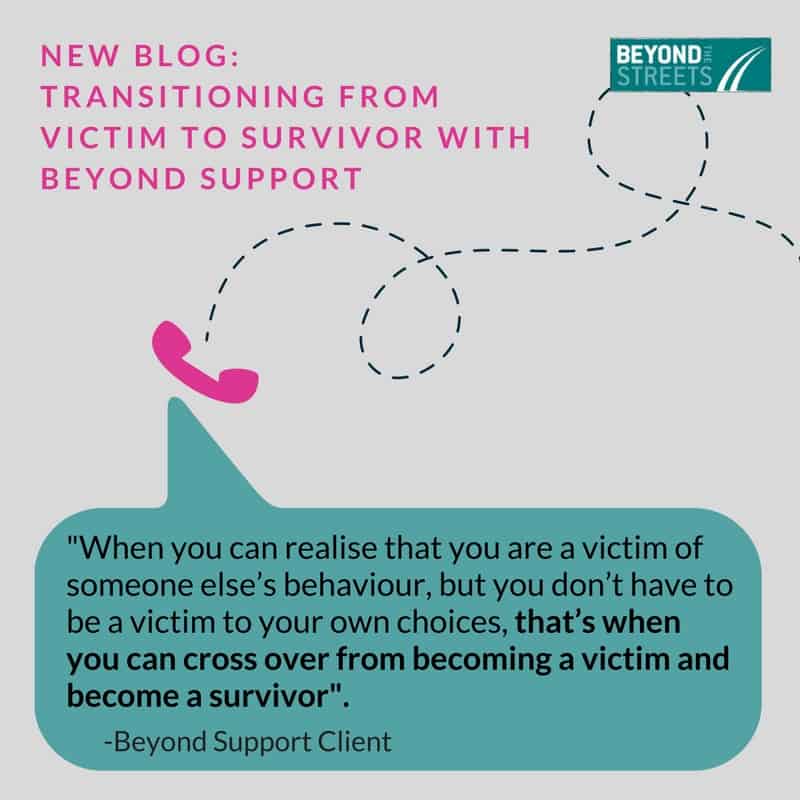 Amy was groomed by an apparently loving boyfriend when she was still under 16. She was locked away so that those who had the key could use her to sell sex. She eventually managed to escape physically but her important teenage years of growing up and discovering who she is felt like they had been sold by someone else to many men. She worked hard and got a good education but for a long time, she couldn’t see how to stop doing what had been expected of her from a young age. It certainly wasn’t just the money. In fact, she told us she can see the industry changing and the money is not as good as it was. It certainly wasn’t a choice to continue because she liked the lifestyle, it was just what Amy knew and she was good at living her alter ego when she needed to. She couldn’t see that she had a choice.
A visit to the clinic alerted the nurses that she was frightened of examination. They referred her to a psychologist who tried to refer her to us alongside her sessions but Amy wasn’t ready. She stopped seeing the psychologist for a while but something had started to dislodge itself in her and eventually she went back and took our details. This time, she was starting to see the power of her own choice. She decided she wanted her ‘normality’ to change. When our conversations started, Amy was on a mission, she told the brothel management that she was cutting down her hours, then stopping altogether. We talked and she processed her feelings about this growing sense of power to change from victim to survivor.

Everyday Beyond Support offers a listening ear to women like Amy as they transition out of the sex industry, from victims to survivors. It costs us just over £50 for our specialist staff to take a call from a women like Amy. Fund our next call by making a gift towards Beyond Support today, or help secure our service by giving regularly.
Miriam Hargreaves tells Amy’s story. Miriam is a Support Worker and Clinical lead for Beyond Support – our free call-back support service for women exploited through prostitution.
Tags: Beyond SupportExploitationGroomingProstitutionSupportSurvivorVictim