New year, new me. A new year’s reflection from Beyond the Streets.

“I don’t really understand myself, because I want to do what is 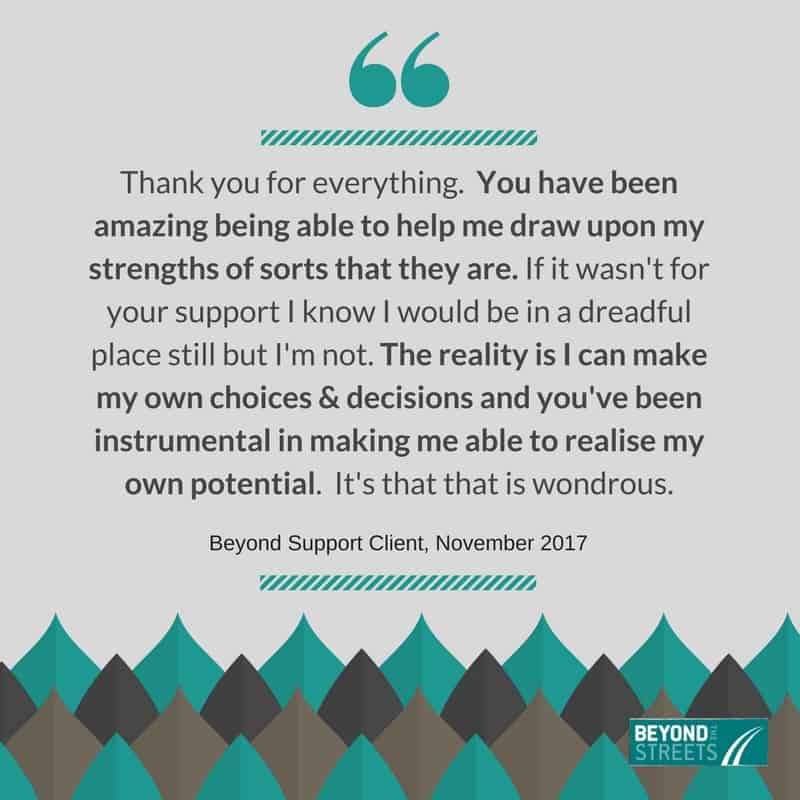 right, but I don’t do it” – The Bible
There’s just coffee creams left, the Christmas cake is a mere slither in the bottom of the tin and on paper there’s no reason why the best laid plans at the end of December shouldn’t kick in now that January is a week old. It’s the month for re-shaping habits, putting into practice the plans we made to improve our future health, wellbeing, sense of contentment, chance of success….
The challenge is that good habits are like muscles. They don’t work themselves. They need decision and action. Once activated they gain strength and it takes less effort to keep them going once they are strong than it does to move ourselves from contemplating that growth to making it happen. I could contemplate the science of inertia and potential and kinetic energy until mid-February, or March, or until the conditions seem a bit better or my mood has changed, or I can start making lots of good choices, minute by minute, hour by hour until I have formed some healthier habits and we’re up and running and I feel better about my life and things seem to start to feel easier.
So, we’re all the same (or is it just me?). All of us, whether we had a cosy Christmas surrounded by loving family or whether our regular reality is the isolation, fear and violence of selling sex continued despite Christmas, all of us face barriers to healthy habits. Some of us just don’t know the care and support of people around us to encourage and cheer us on. Some of us have to face the sense of shame that seems to cripple our best intentions to form other habits. Some of us have had good the opportunity of good ‘choices’ taken away by those who control us. People getting alongside each other makes it so much easier to turn contemplation into action.
Our team at Beyond the Streets, come alongside women as they seek to make changes to their lives and steps away from Prostitution. From contemplation to action, we walk with women, cheering them on as they take positive steps forward and continuing to believe in them when they are backwards in coming forwards. One woman supported by Beyond Support told us;
“Thank you for everything. You have been amazing being able to help me draw upon my strengths of sorts that they are. If it wasn’t for your support I know I would be in a dreadful place still but I’m not. The reality is I can make my own choices/decisions and you’ve been instrumental in making me able to realise my own potential.  It’s that that is wondrous.”

Wishing you a hope-filled 2018 from all at Beyond The Streets.
Everyday Beyond Support offers a listening ear to women  as they transition out of the sex industry. It costs us just over £50 for our specialist staff to take a call from a women. Fund our next call by making a gift towards Beyond Support today, or help secure our service by giving regularly.
Words by Miriam, who works for Beyond the Streets as the Clinical Lead for Beyond Support – our call back service for women involved in prostitution. She is passionate about people’s tough lives being transformed.
Tags: ExploitationProstitutionRoutes OutSexual Exploitation