Friday: The working week of a Women’s Support Worker.

After ten years in the women’s sector, Cate is leaving Beyond the Streets and the sector altogether, to train as a Clinical Psychologist. Cate has filled a crucial role for Beyond the Streets by working as a Women’s Support Worker within the Door of Hope project in east London. Reflecting on the last decade, Cate’s written up a memoir of sorts – a day by day account of the highs and lows of her role supporting women. We hope it will give you an insight not only into our work, but into the complexity of women’s lives and their need for long term, specialist support: the kind of support Cate has offered hundreds of women in the last decade.
F R I D A Y 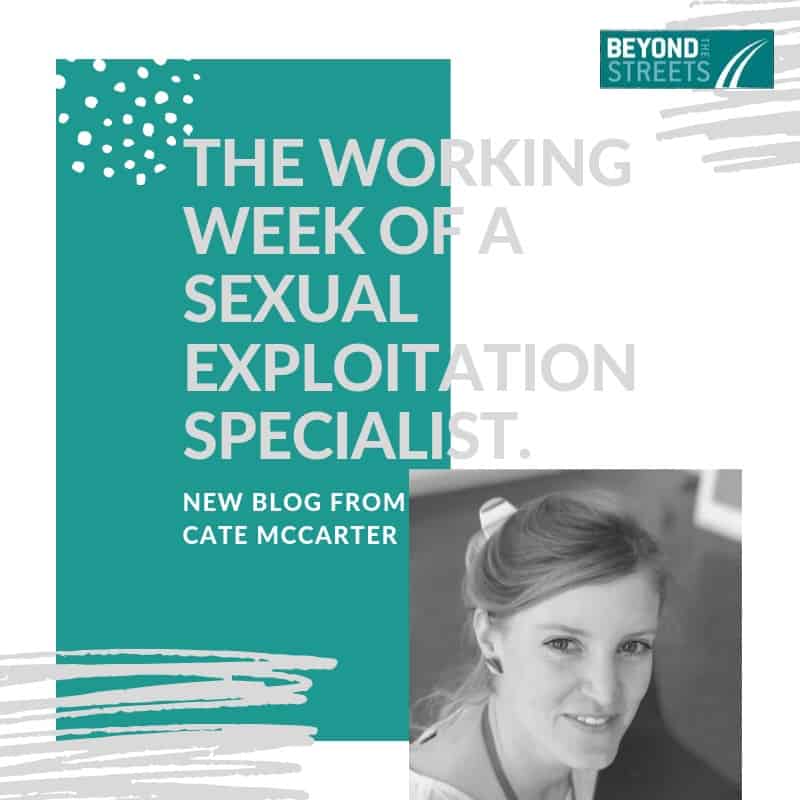 The woman who I met at the police station yesterday doesn’t come to our arranged meeting place.  She doesn’t have a number or an address, so I’ll just have to wait to bump into her again.  She’s got six weeks to complete the court diversion scheme.
I write a letter of support for the judge for my teenage client. She texts me to say she’s going to hand herself into the police next week and has found herself a solicitor.  This woman is incredible!
Whilst I’m standing outside a station talking to a woman, another two women walk past, one who’s just been evicted and the other one who we keep losing contact with.  She looks terrible but doesn’t stop to talk.  I briefly remind her about her housing assessment next week – she said she’ll be there.
I call the B&B to remind the woman who had been placed there about her housing appointment.  She didn’t stay so the bed has been closed.  Maria gets on the phone to housing to advocate for a second chance.
The woman whose baby was removed on Monday calls me to say that she’s got a birthday card from her solicitor.  I wish all solicitors were this good.
I go home for a rest as I’m doing outreach tonight.  At 10.30pm I meet a wonderful volunteer and together we take condoms, clean needles, hot chocolate and food onto the beat.  We meet Frances* and remind her about her probation appointment on Monday – if she doesn’t go, she’ll be recalled to prison.  She’s grateful for the gloves we give her because it’s chilly.  Macy is angry because she’s been given an eviction notice. We arrange to meet on Monday.  Amelia comes to grab condoms but doesn’t stop.  We get a big hug from Sasha who we’ve not seen for months. She tells us she’s not been out as much because her new boyfriend has been funding her drug habit, but they’ve had a fight tonight so she’s out to make money. She gives us her friend’s phone number and tells us to call her next week.  We have a long chat with Gabi. She’s very drunk and tells us that it’s her daughter’s first birthday today.  She’s tearful and reflective.  We leave her on the street corner and as we turn back, we see her tumble into a punter’s car.  We wonder, not for the first time, who the hell is buying sex from such vulnerable women.  All we can do is pray for her safety as the car drives off.
*Note the names here have been changes for women’s safety.

Cate works at Beyond the Streets, a national charity working to build routes out of sexual exploitation for women. In East London, the Door of Hope project supports around a hundred women experiencing sexual exploitation annually. Cate’s insight demonstrates how vital advocacy and support is for women, contribute towards that work today by making a gift to the work of Beyond the Streets.
Tags: AbuseChild Sexual ExploitationEast LondonEnd ExploitationExploitationGroomingWomen