Partnering with the English National Opera to celebrate our work with the women of Whitechapel.

This Spring, Beyond the Streets were delighted to be supported by the English Natio 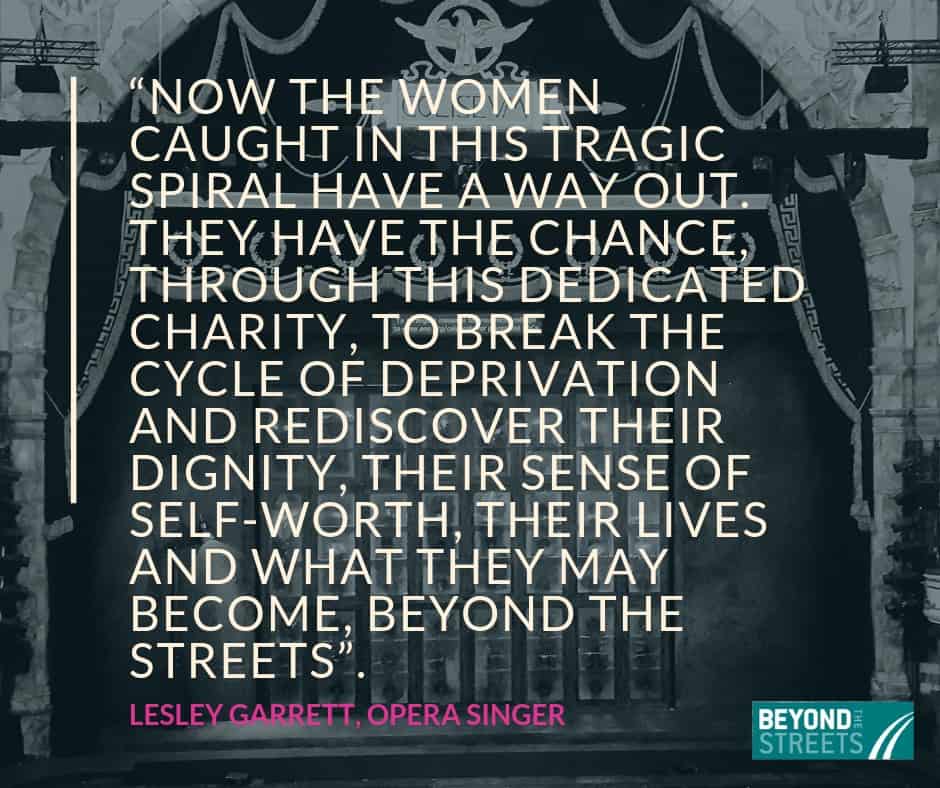 nal Opera, who in hosting the World Premiere of ‘Jack the Ripper: Women of Whitechapel’ used their platform to shed light on our work, supporting women who still sell sex in the area today through the Door of Hope project.
Beyond the Streets works on the same streets today as the unidentified killer publicly known as “Jack the Ripper” murdered five women on. This was just over 130 years ago but the stories of those he killed mirror many stories that are heard today.  We were grateful to the English National Opera for giving a four-page spread in their programme to shed light on women’s current experiences of sexual exploitation in Whitechapel.
Lesley Garrett, Opera Singer, who played Ripper victim Catherine Eddowes in the World Premier of ENO’s Jack the Ripper: The Women of Whitechapel told us:

“I’ve had the humbling opportunity to help to raise funds for Beyond the Streets and I know their work is as vital now as it would have been in 1888, the year our opera was set.
Back then the street drug of choice was gin, now it’s Class A drugs. Sadly the cycle of addiction leading to poverty and finally sexual exploitation is as endemic now as it was so long ago.
Back in Jack’s time absolutely no one would have cared what became of these vulnerable souls. Now the women caught in this tragic spiral have a way out.
They have the chance, through this dedicated charity, to break the cycle of deprivation and rediscover their dignity, their sense of self-worth, their lives and what they may become, Beyond the Streets”.

“For centuries, women in prostitution have been considered by many as shunned outcasts, but the outstanding work carried out by Beyond the Streets helps in restoring dignity and humanity to these women whose lives have too often been deprived them of any other choice. I applaud them and have nothing but the deepest of respect for everything they are doing and aspire to achieve”.