Monday: The working week of a Women’s Support Worker.

After ten years in the women’s sector, Cate is leaving Beyond the Streets and the sector altogether, to train as a Clinical Psychologist. Cate has filled a crucial role for Beyond the Streets by working as a Women’s Support Worker within the Door of Hope project in east London. Reflecting on the last decade, Cate’s written up a memoir of sorts – a day by day account of the highs and lows of her role supporting women. We hope it will give you an insight not only into our work, but into the complexity of women’s lives and their need for long term, specialist support: the kind of support Cate has offered hundreds of women in the last decade.
M O N D A Y 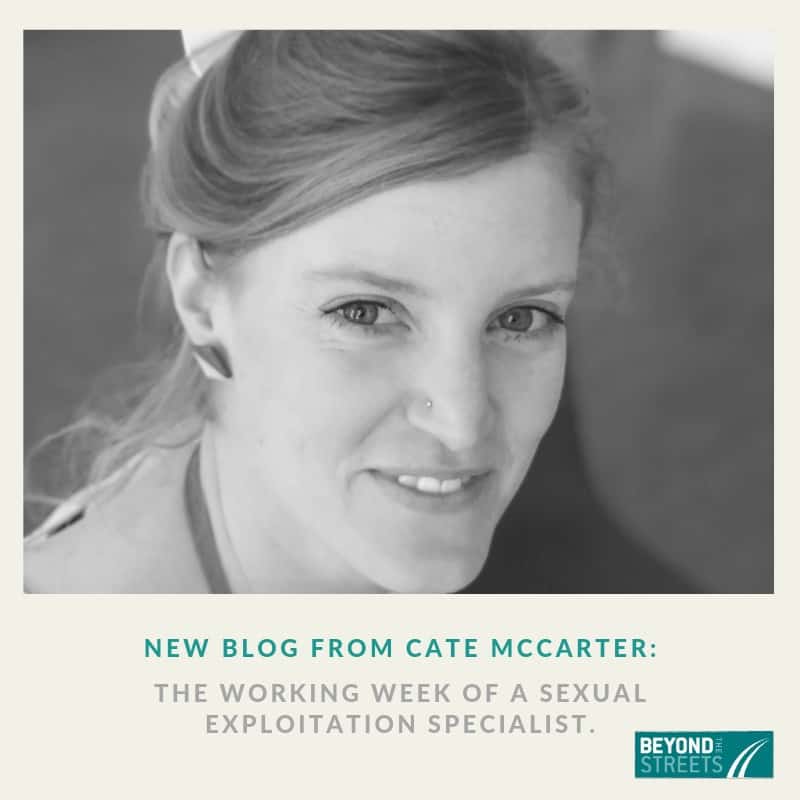 I turn on my phone after the weekend and receive a distressed voicemail from a woman I’ve been supporting. She went to A&E on Saturday as she was suicidal, but she was escorted from the building by security. She was evicted from her hostel the week before. I give her a call and she tells me she stayed with a friend last night and she’s feeling a bit better.  I try to keep my feelings of powerlessness at bay. The local authority said they wouldn’t help her so I’ve made a referral to a specialist refuge for her, she has an assessment with them next week. It’s just not soon enough.
We have our team meeting, checking in on the women we’re supporting and making sure we’re looking after ourselves and each other.  During the meeting I get repeated calls from another woman I’m supporting. She’s in court tomorrow and is very anxious.
I check outreach notes from Friday night – we have a team out in the community twice a week who are meeting women selling sex.  There are a couple of women who’ve given their phone numbers and my colleague Maria and I agree who will follow up.
I get a call from a Doctor in the sexual health clinic, asking if we can share test results with a woman we’re working alongside. I relay this message to her at the probation appointment that afternoon where I’d planned to meet her.  She agrees. I make the necessary phone call to the Doctor and I’m able to share the results with her, unfortunately they’re not good.  She needs medication, but there’s no way she could get to the clinic, so I arrange to pick up the medication and pass them to her. She needs to take the medication for 3 days. She’s homeless so we’re not sure if that’s going to happen, consistency is hard when you’re trying to survive life on the streets.
I meet with a client’s hostel key-worker and discuss concerns. The client was supposed to be there too, but she hasn’t been back to the hostel today. Her mental health is deteriorating and there are concerns that another hostel resident is injecting her with heroin in exchange for sex.  She needs so much more support that this hostel can offer her and should be in single sex accommodation for her own safety. Unfortunately, specialist hostels are hard come to by and there are few options locally – I try to support women and their key-workers to make the best of the provision there is.  The hostel key-worker makes a safeguarding referral whilst I will try to advocate for her to be seen by the local mental health team. I get a call later saying she was brought back to the hostel by enforcement officers who found her in the park, very drunk.
Before finishing for the day, I debrief with a colleague about the days events. We’re intentional about leaving worries at work, I name the women I’m worried about and agree with my colleague to leave them at work and pick them up again tomorrow morning. Often it’s easier said than done, but it’s important none the less.

Cate works at Beyond the Streets, a national charity working to build routes out of sexual exploitation for women. In East London, the Door of Hope project supports around hundred women experiencing sexual exploitation annually. Cate’s insight demonstrates how vital advocacy and support is for women, contribute towards that work today by making a gift to the work of Beyond the Streets.
Tags: ProstitutionSexual ExploitationVAWGWomens Sector