Wednesday: The working week of a Women’s Support Worker.

After ten years in the women’s sector, Cate is leaving Beyond the Streets and the sector altogether, to train as a Clinical Psychologist. Cate has filled a crucial role for Beyond the Streets by working as a Women’s Support Worker within the Door of Hope project in east London. Reflecting on the last decade, Cate’s written up a memoir of sorts – a day by day account of the highs and lows of her role supporting women. We hope it will give you an insight not only into our work, but into the complexity of women’s lives and their need for long term, specialist support: the kind of support Cate has offered hundreds of women in the last decade.
W E D N E S D A Y 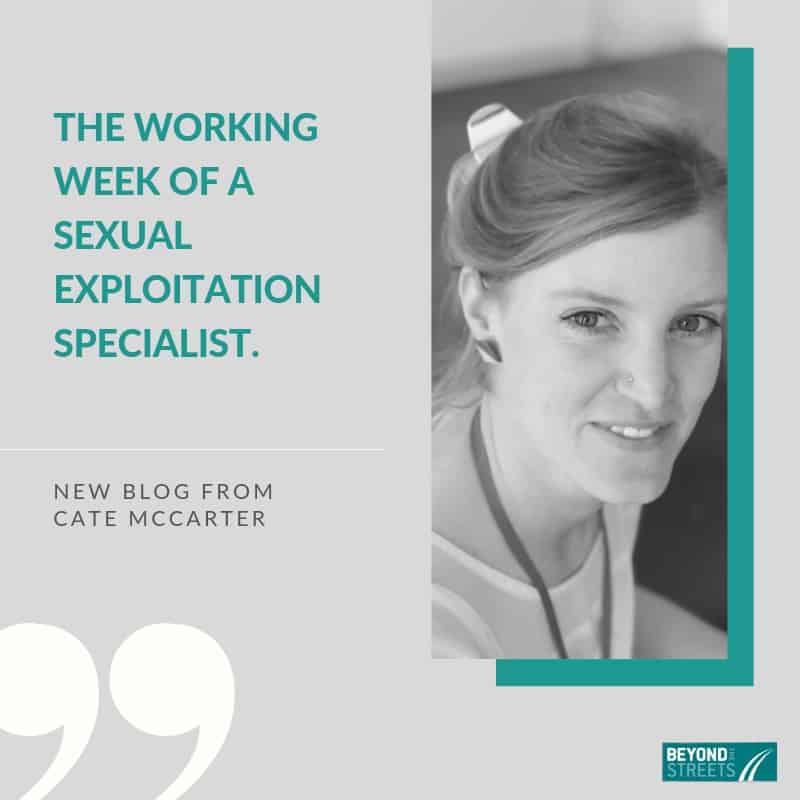 I spend my day periodically fighting with housing, trying to ensure that my client is housed when she is released from prison tomorrow.  She’d been promised a hostel space, but the offer was withdrawn because they placed another woman there who she has historically fought with.  I think this is true of most women in the borough so I’m not sure why she’s been singled out.  They said that there are no hostel places suitable for her in the borough and that she will therefore have to ‘sort herself out’.  This response is incredibly unhelpful: I think to myself, if she could sort herself out then you wouldn’t have a job!
I argue she should be placed in B&B because she’s vulnerable.  Housing try to argue that this woman does not have a vulnerability.  She is a care leaver, has a history of childhood sexual abuse, uses crack and heroin problematically, sells sex on-street to survive, regularly self-harms and makes attempts to end her life and has been in abusive relationships for most of her adult life.  She’s 23.
Eventually they establish that she has a chain number, the magical key to housing.  You get a chain number when you’re a verified rough sleeper, but most women sofa surf and are hidden from the rough sleeper’s outreach team who allocate these. Anyway, the chain number means that they eventually agree to house her in a B&B, stating that they have no suitable hostel beds for her. She’s 23 and has been selling sex on-street for two years.
In between this, I visit another woman in her hostel.  She’s loving being inside after 9 years of sofa surfing and rough sleeping.  However, she was raped two weeks ago, and her alcohol use has spiked as she tries to cope.  It’s very difficult to talk with her whilst she’s intoxicated. She’s not supposed to drink alcohol in her room, so her licence is at risk.
I’m glad to be able to offer her the specialist support she deserves after experiencing an act of sexual violence – knowing that many women in towns and cities across the UK don’t have access to it.

Cate works at Beyond the Streets, a national charity working to build routes out of sexual exploitation for women. In East London, the Door of Hope project supports around a hundred women experiencing sexual exploitation annually. Cate’s insight demonstrates how vital advocacy and support is for women, contribute towards that work today by making a gift to the work of Beyond the Streets.
Tags: ProstitutionSexual ExploitationVAWG