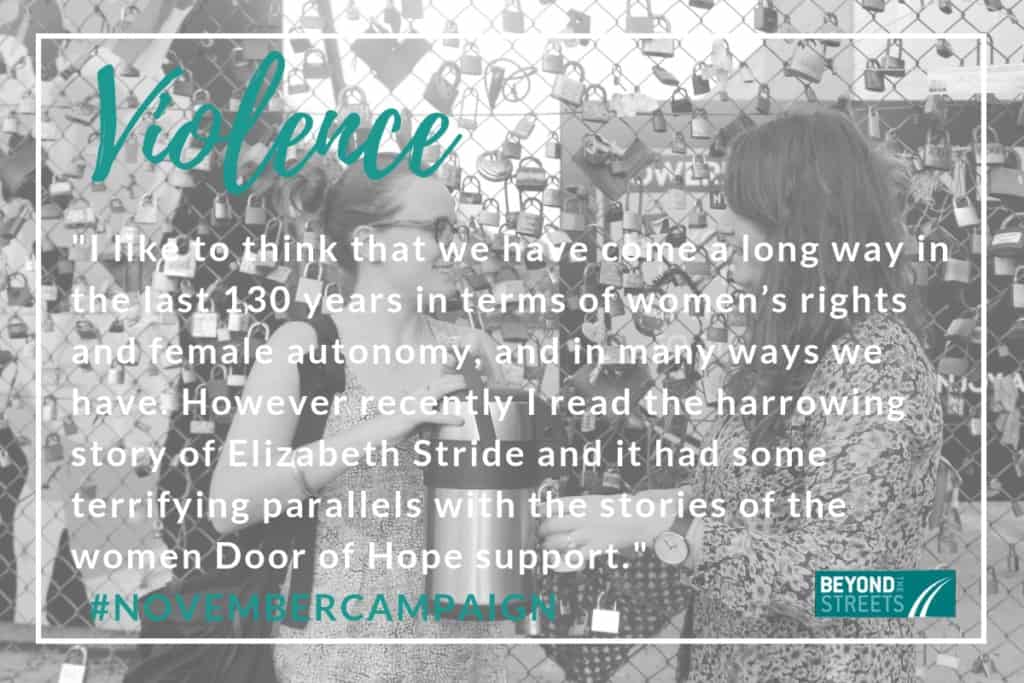 I like to think that we have come a long way in the last 130 years in terms of women’s rights and female autonomy, and in many ways we have. However recently I read the harrowing story of Elizabeth Stride and it had some terrifying parallels with the stories of the women Door of Hope support.
Elizabeth Stride was in an abusive relationship with Michael Kidney. She laid an assault charge against him and fled the relationship afterwards. As a women lacking options she ended up selling sex in Whitechapel to survive. She unfortunately met her premature death by the man known as Jack the Ripper.
This story struck a chord as I have heard such similar stories on the streets of Bethnal Green and Leeds speaking to women involved in prostitution as an outreach worker. Many of them are in abusive relationships, some where they are providing for their partners’ drug and alcohol addictions as well as their own, meaning they have to work twice as much. Data suggests it is a very common reason why women enter prostitution in the first place; research in 2012 by the charity Eaves found that 50% of women in prostitution were coerced into it by a controlling partner.
For Elizabeth the violence didn’t stop with her abusive partner but continued when she started selling sex in Whitechapel where she was violently murdered. Eaves found in 2012 that “women experienced violence from a variety of directions: partners, pimps and punters.” 63% of women have experienced violence from men who buy sex from them and women involved in prostitution are eighteen times more likely to be murdered than the general population (1).
Violence is part of the day to day lives of the women we work with at Door of Hope and I think this is horrendous. Stories of sexual violence are painfully common and we need this to change. Contribute to change by supporting the #NOvemberCampaign.

Stand in solidarity with women this month by taking part in the #NovemberCampaign Three ways you can support the campaign:
1  Contribute to our crowdfunder to raise £22,000 – we invite you to make a gift of £2.20, £22 or £220 to see our work supporting women thrive. Make a gift towards our crowdfunder here.
2 Say no to something you love to save money or raise sponsorship for our work saying no to Sexual Exploitation. You’ll find a step by step guide to taking part in the campaign here.
3 Show your support on social media. Click save on this image and share it on Twitter, Istagram & Facebook tagging us, using the hashtag – letting your followers know that you say no to sexual exploitation and violence of women past and present.

A blog by Anna, who has recently joined our board of Trustees, having volunteered as an outreach worker with the Door of Hope project for several years. Having recently relocated to the North of England, Anna now volunteers with the Joanne Project who support women in street based prostitution in Leeds. Anna is supporting the #NOvemberCampaign by giving up social media for the month.