Thursday: The working week of a Women’s Support Worker.

After ten years in the women’s sector, Cate is leaving Beyond the Streets and the sector altogether, to train as a Clinical Psychologist. Cate has filled a crucial role for Beyond the Streets by working as a Women’s Support Worker within the Door of Hope project in east London. Reflecting on the last decade, Cate’s written up a memoir of sorts – a day by day account of the highs and lows of her role supporting women. We hope it will give you an insight not only into our work, but into the complexity of women’s lives and their need for long term, specialist support: the kind of support Cate has offered hundreds of women in the last decade.
T H U R S D A Y 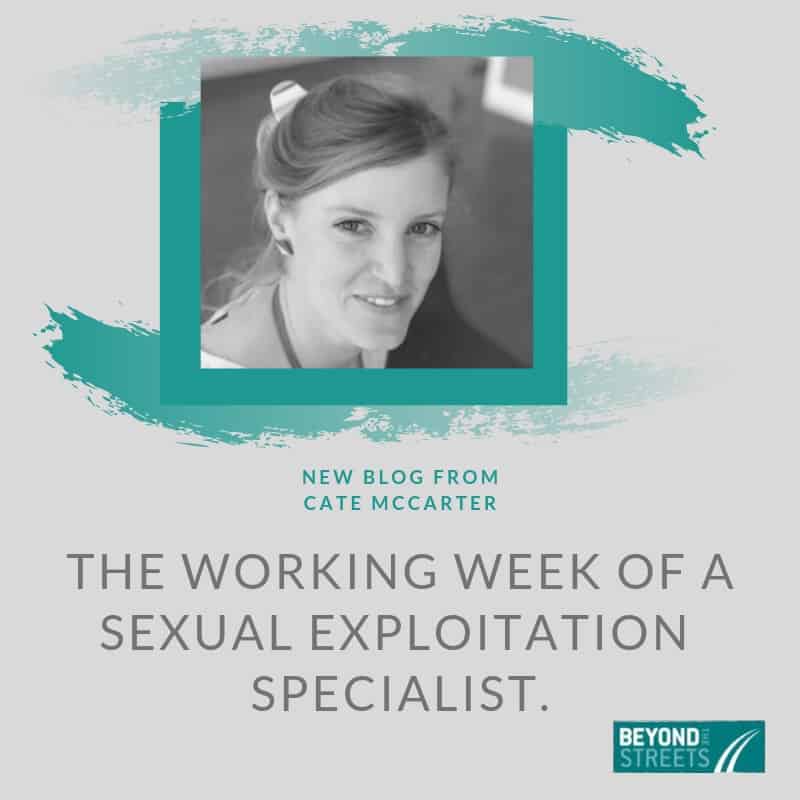 An early start for me as I need to get to HMP Bronzefield for 8.30am to be there in time for my client to be released from prison.  Now that HMP Holloway has closed, it makes it so much harder for women to keep in touch with their support services whilst they’re in prison.  We visit as much as we can and meet women at the gate – it’s rare for charities to be able to do this, it sets us apart.
Despite this, this woman isn’t thrilled to see me – she’s been messed around by professionals and is wary of what I can do for her.  However, she agrees to travel back with me.  We hitch a ride with a colleague from the rough sleeper’s outreach team who’ve got a bigger budget than us and have hired a car to pick up one of their clients.  We journey back to East London with me sandwiched in the back between two women talking about their plans.  I have brought them some toiletries to welcome them back to the community and they enjoy having a rummage in their make-up bags.  We got some wonderful donations from Beauty Bank and the Body Shop and the women are delighted. They are very excited to be back in London.  I am bracing myself for this woman disappearing during the day – she’s got a lot of appointments to keep with probation, the drug and alcohol support team and housing.
We drive to the drug services where we’ve arranged for the women to be seen promptly to get their methadone scripts sorted. Even the short few minutes we’re in the waiting room allow enough time for the woman I’m supporting to find an old associate, arrange for him to call their dealer and buy some crack.  She gets called into her appointment and this guy tries to get her out, telling the receptionist that he’s her cousin and he’s got some urgent news for her.  The receptionist makes a move to go and get her – I gesture to him ‘NO’! Luckily, he sees me and doesn’t disturb the meeting.  She comes out with her script.
Next stop is housing where I hand over to my colleague to continue advocating for this woman.  My colleague Maria is our resident housing expert so I’m glad to leave this with her.  The woman is eventually housed in B&B accommodation.  She needs a high level of support, so this is entirely unsuitable, but much better than being homeless.  If she doesn’t stay for one night, then the bed will be closed, and she’ll be homeless again.  The women we support are nocturnal and often get stuck in a crack den or sell sex through the night to fund their drug habit. The commitment for her to stay indoors throughout the night is unrealistic.  She and Maria are held at housing for hours so Maria call’s probation and rearranges the next appointment for tomorrow.
I visit a teenage woman I’ve supported for many months who was recently released from her second spell in prison.  She came out determined to change her life and she’s been doing exactly that.  I’m incredibly proud of her as she negotiates drug treatment, job centre, social worker appointments and rebuilding relationship with her family.  As we sit in a café, she reflects on all she’s been through.  This is the first time in 18 months that I’ve heard her talk about her feelings.  She talks about the first time she was put out on the street to sell sex by her then-boyfriend who was violent and controlling.  I feel very sad, but glad to be able to witness her story.  Just as we’re about to leave, we make a call and find out that there’s a warrant out for her arrest as she’s failed to engage with probation.  My heart hurts as I see her face crumple.  I’m devastated for her.  I reassure her that I’ll advocate for her in court to stay in the community, where she is doing so well. She jumps into her boyfriend’s car, leaving me to cry my way back to the office where I’m due in a meeting.  We’re trying to ensure a better multiagency response from the borough and have got some strategic leads around a table to make this happen.  It’s an encouraging meeting, but I’m very distracted by worry about my teenage client.
We get a call from the police asking us to attend an interview for a woman who’s been arrested for outraging public decency. I go and sit with her whilst she’s asked to admit performing a sex act in a public place. She agrees to a referral to us on the court diversion scheme and tells me she really needs help. She can’t stay long and doesn’t have a phone but promises to meet me tomorrow.

Cate works at Beyond the Streets, a national charity working to build routes out of sexual exploitation for women. In East London, the Door of Hope project supports around a hundred women experiencing sexual exploitation annually. Cate’s insight demonstrates how vital advocacy and support is for women, contribute towards that work today by making a gift to the work of Beyond the Streets.
Tags: ProstitutionVAWG