The Church and Prostitution

Just a short walk from Southwark Cathedral lies a little known medieval graveyard which not many will have visited. Although a short walk, it is a world away from the life at the Cathedral. This Graveyard is known as the Cross Bones Graveyard and was an unconsecrated graveyard for women who were involved in prostitution in London. It closed in 1853 and now all that remains, apart from hoardings for development, is a set of gates which acts as a shrine to the many women who have been murdered. Memorials hang on these gates to the women whose lives were cruelly taken away in Ipswich along with countless other names, reminding us of the violence women face who are involved in prostitution.
Whilst the difference between the Cathedral and the Cross Bones Graveyard is great, they are linked in a surprising and unnerving way. Southwark Cathedral was controlled by the powerful Archbishop of Winchester who had established Winchester Palace in nearby Cink Street as his London residence and power base. Just to the north lay the City of London on the northern shores of the Thames. In the City, prostitution was illegal but to the south it was different. In 1161, the Bishop was granted the power to licence prostitution and brothels in the area he controlled. This power was taken up and the Church gained from the activities.
Today, if you visit the ruins of Winchester Palace, Wolvesey Castle in Winchester or Southwark Cathedral it is easy to get an idea of the grandeur and riches of this Bishop’s seat. The short walk to the Cross Bones Graveyard is a poignant reminder of the vast distance between the lives of the Bishops and of the women who have been buried without name or identity. History in our midst but often missed by busy lives.
For each of the women buried at the graveyard or whose name is remembered on the gates, there is another thread of history – that of a daughter, friend and companion. It’s impossible to say how much the Church profited from the trade it facilitated but there is no denying the power was in the hands of the privileged. We dream of the day when the Church publicly acknowledges the errors of the past, when a memorial to the women is erected at Southwark Cathedral and the reality of the Graveyard to the “Outcast Dead” isn’t hidden away hoping history stays in the past. 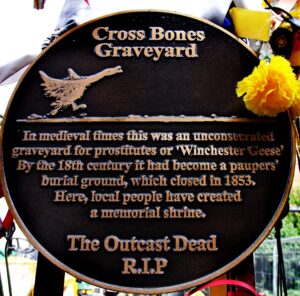