2017, the year we got Trumped and terrorised. Theresa May was re-elected as our leading lady and millions of women marched in the largest worldwide protest in recent history. I’ll remember it as the year that homelessness rose for the sixth year in succession- already up 16% in 2016, researchers are expecting that statistic to double when the data for this year is released.
As an outreach worker for Beyond the Streets Door of Hope project, working on the front line with women who are sexually exploited in London’s East End, our team tend to be the first to notice these trends, reflected in the lives of the women we work with and the stories they share with us.
This year has been a busy one for the Door of Hope team, we’ve seen a sharp rise in the number of women we meet on outreach. In 2016 Door of Hope supported 64 women in total over twelve months. By February 2017 our team had already supported 64 women in the first two months of the year, and have added dozens more to our caseload as the year has progressed. We work with women who became involved in street prostitution as a result of complex vulnerabilities- a last resort response to insurmountable struggles. Most have been pushed to the very edge through poverty, lack of opportunity and social exclusion. Their support needs are varied and wide ranging, but increasingly the common theme we see running through their lives is homelessness.
Here’s the thing about us women: we’re a resourceful bunch. You won’t necessarily see us rough sleeping outside your local station, or queuing for the local night shelter- we’ll do what we need to do to find a safer alternative. For the women Door of Hope supports that’s a night on a 24 hour bus, exchanging sex for a place to stay and, increasingly, sofa surfing- tapping up old friends, distant family and punters for a sofa to sleep on.
A survey of 458 recent or current rough sleepers in England and Wales undertaken by Crisis confirms this. It suggests that there is a total of 68,000 women in temporary accommodation, emergency shelters and sleeping on the streets. However, Crisis follow this was a caveat, recognising that an estimated 62% of single homeless people are hidden ‘sofa surfers’ who won’t show up in  statistics equating to a further 68,300 people sofa surfing in the UK today, many of them women. Within the hidden issues of sexual exploitation, is a growing issue of hidden homelessness.
This week Beyond the Streets launches the #NOvemberCampaign – asking supporters to give up something they love to stand in solidarity with sexually exploited women. Each week of November we explore a new theme, inspired by the lives of the women we work with at Door of Hope. This week’s theme is comfort, or rather a recognition of the lack of it in the lives of the women we work with.
As I considered what to give up this week, I noticed how many of my own comforts – the things that put me at ease and keep me well – are connected to having a safe and happy home. Access to warming hot drinks, heating and hot baths makes home a place of comfort for me, a haven if you like. For the women we work with, sexual exploitation, homelessness and the resulting complexities result in a life focused on survival, where comfort is off limits. This week I’ll be sacrificing the comfort of hot caffeinated drinks – hoping that the money I save and awareness I raise, will build a better tomorrow for the women I work with.

What comfort can you say no to this week? Stand in solidarity with women this month by taking part in the #NovemberCampaign or by making a gift  of £18 to support the Door of Hope project, for which we hope to raise £18,000 through the #NOvemberCampaign.
Born and bred in east London, Rebecca co-ordinates Beyond the Streets Door of Hope project. You can hear Rebecca talk more about Door of Hope by joining us on an Alternative Jack the Ripper Tour, launching this November. 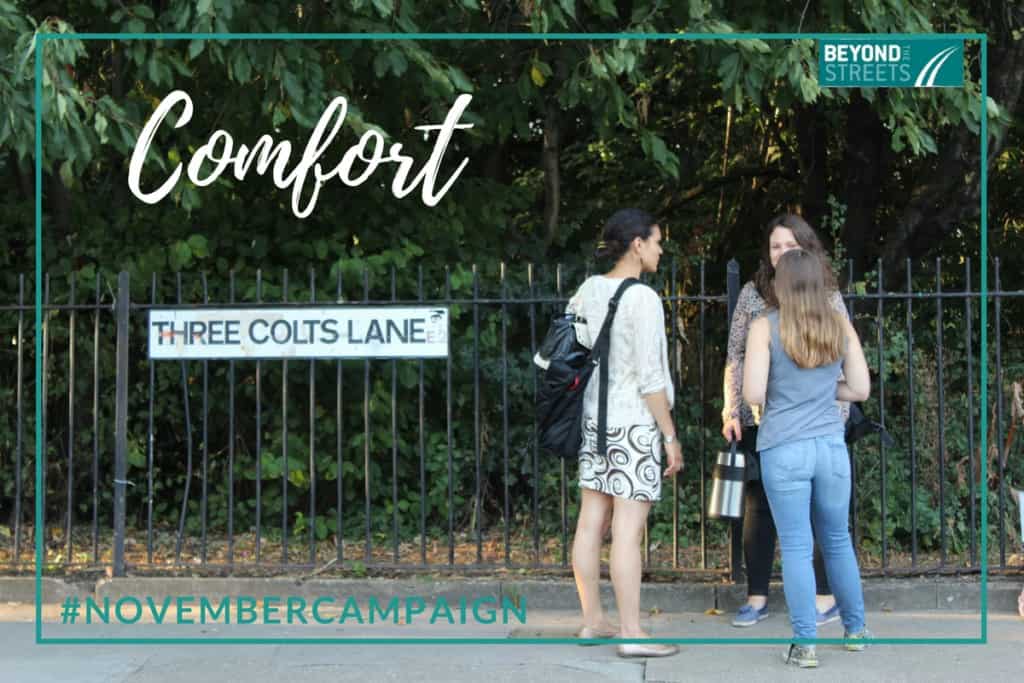