Three Girls and Beyond Support: How we are supporting survivors of Child Sexual Exploitation.

Over the last week, our team have been gripped the by BBC three part series ‘Three Girls’, the dramatized story of the Rochdale grooming scandal. The series followed the lives of three girls, ‘Amber, Ruby and Holly’- each groomed into child sexual exploitation as teenagers by local predators and follows their courageous journey to prosecute their abusers, despite the failings of support services along the way.
We know that the experiences of those three girls – and the many others who survived child sexual exploitation in Rochdale – isn’t an isolated incident, but rather reflective of many women and children across the UK who have been preyed upon and now find themselves involved in prostitution.
Three Girls highlighted the support available for victims of Child Sexual Exploitation. But what happens when those children become women? As they enter into adulthood, child sexual exploitation often becomes legitimised as sex work or prostitution. Overnight, exploitation becomes a ‘choice’. We know that many women didn’t make a choice to enter prostitution, rather those that groomed them made that choice.
Through Beyond Support– the UK’s only call-back support service for women in the sex industry- we hear stories like those brought to life in Three Girls on a daily basis. Research has identified that between 50% – 76% of women involved in prostitution started before the age of 18- for the majority of women involved in prostitution, their involvement began as child sexual exploitation*. This is something many women who have contacted Beyond Support have confirmed, tracing their journey into prostitution back to their teenage years, often due to the 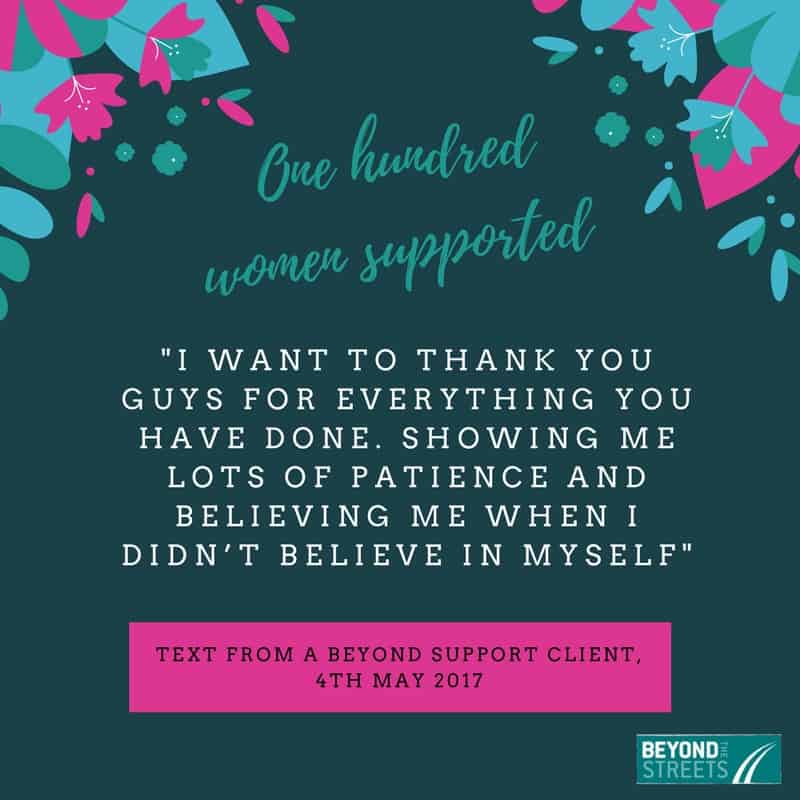 coercive control of another person. Since we launched our service two years ago, we have had the privilege of supporting many women involved in the sex industry who are looking to make changes to their life. Last week we celebrated supporting the 100th situation since our service began! We exist to support women, standing alongside them as they make changes to their life and enabling them to find a lasting route out of prostitution. Alongside this, Beyond Support connects with people who are struggling to comprehend what happened to them in their formative years. If you have been affected by grooming and child sexual exploitation as a young person, our team can unpack that with you and if you’d like, connect you with local support services for face to face support.
No need to take our word for it, here is what one Beyond Support caller told us about our service: “I want to thank you guys for everything you have done. Showing me lots of patience and believing me when I didn’t believe in myself”.

We are delighted to have been able to stand alongside 100 women taking brave steps forward. We believe your story and we believe that you can make the change you want to see in your life. For support from our team contact 0800 133 7870 or e mail: support@beyondthestreets.org.uk. Please note that we are not a helpline, please l eave a message and we will contact you to arrange times that work for you.