“I want that…” in Amsterdam

Prostitution has been legalised since 2000, and although some reports suggest that the Dutch Government have recently closed certain sex clubs, one estimate is of approximately 20,000 selling sex in the Netherlands. Of those, 40% are active in Amsterdam with 5% working the 370 windows or in sex clubs in and around the red light district (Janssen; Hovener, 2010). Globally, routes into the sex industry are too easy; financial reasons, lack of options, being trafficked, coerced by a ‘Loverboy’ and the search for a better way of life. 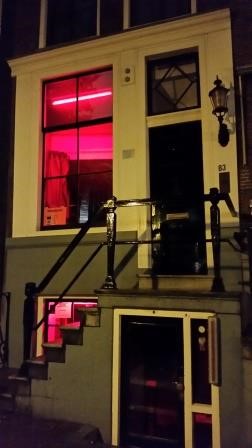 I have been to many red light districts, often to work with the charities supporting women, but in Amsterdam I was struck at how the women portrayed themselves like dolls.  The window frame was like a box with the red light amplifying them as they stood or talked on the phone, smoked or primped in the mirror. It felt odd to be a voyeur of this illusion, just another part of the crowd walking past the women. I found myself looking into their eyes and smiling at the women; after nearly 20 years worth of working with women in that context it was natural (if not slightly weird for them).
What was immediately noticeable was the groups of lads walking around drunk and or high. As we were walking through the red light district one English man shouted to his mates (who stood near me) as he drew out some money…‘Well that’s going on the nearest whore!..’; laughter ensued. The way he came across, money seemed to be the only thing he had.
Later on that evening another young lad next to me said ‘Look at that…I want that…!’. He was gone before I realised what he said – not ‘Look at her’. Dehumanising and objectifying women can be trademarks of some men who buy sex. But SHE had a name; she was not the disembodied ‘doll’ that he had seen.
The visit made me reflect on what we do at Beyond the Streets –enable routes out for women in the UK. For women with few options, who have been coerced or forced by ‘loverboys’ it’s routes out and genuine alternatives that makes me say –‘I want that…!’
*A new fund of 3 million Euro has been made by the Dutch Government available to find alternatives (see here 3 million )
If you want the same as me then join Beyond the Streets in our November campaign NOvember
What can you say NO to?
Posted by Beyond The Streets on 14/10/2014 at 01:43 PM