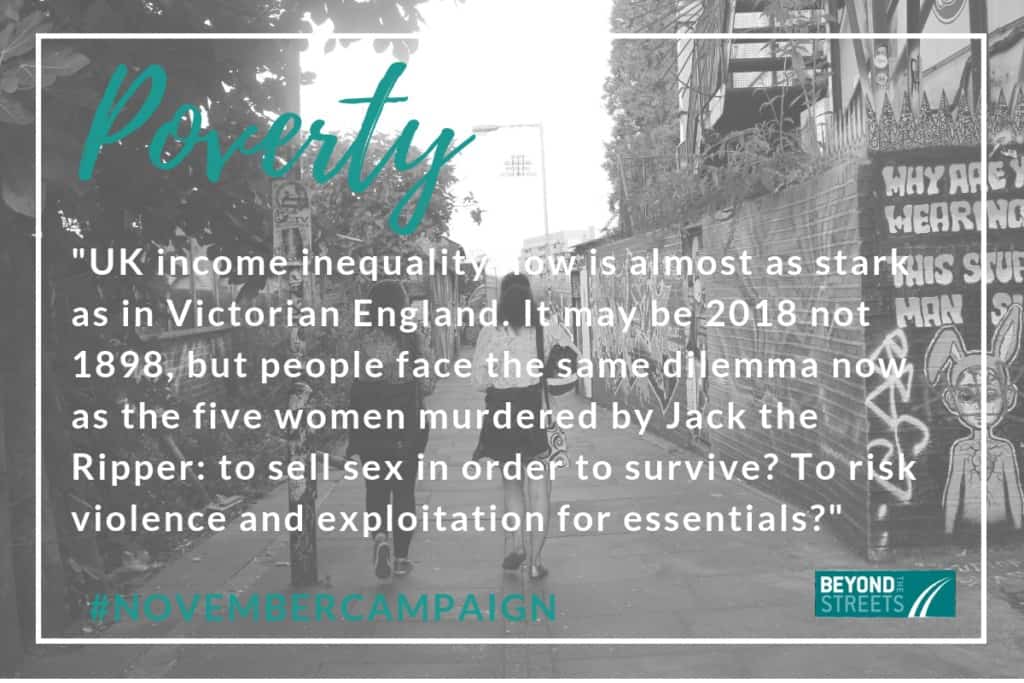 There’s a Latin American saying that’s really stuck in my head when thinking about NOvember: to those who are hungry give bread, to those who have bread a hunger for justice.
It lays down a real challenge. If I have enough bread (which, currently, I fortunately do) how can I help those struggling to survive – whether with food or essential services or support? And how can I fight for things to be better? It is why I got involved with Beyond the Streets.
It’s a shocking fact in modern Britain how many people struggle for food. Or shelter. Or heating. Neighbours, colleagues, the person next to me on the bus.
Research shows that poverty is a significant driver of women who sell sex and is why prostitution is often referred to as ‘survival sex’. A 2015 report by charity Changing Lives who work with vulnerable people in the North East summed it up: ‘The link between prostitution and poverty was palpable – selling sex for a roof over your head, for laundry, tiny amounts of money, a packet of cigarettes, a bottle of cider’.
An earlier study found 74% of women involved in prostitution cited poverty, the need to pay household expenses and support their children, as a primary motivator for entering prostitution.
That’s why the Beyond the Streets projects, like Door of Hope on my doorstep in East London, offer women essential day-to-day support as well as genuine routes out of selling sex for the long term.
UK income inequality now is almost as stark as in Victorian England. It may be 2018 not 1898, but people face the same dilemma now as the five women murdered by Jack the Ripper: to sell sex in order to survive? To risk violence and exploitation for essentials?
NOvember is absolutely about raising funds for Beyond the Streets life-changing work. Importantly it also encourages all of us to stand with those affected by sexual violence, and fight for things to be better.
Whether it’s through a daily reminder of incredibly tough choices others are having to make. Or explaining to people why we’re not doing, buying or having things we normally do and introducing them to the reality of sexual exploitation.
For me, it’s coffee. I can easily have two cups before leaving home, at least three or four more in the office. Plus going out for coffee or having one when commuting.
For the next month it’s NO to coffee. This will give me plenty spare change to donate to Beyond the Streets. And every time the smell of coffee tempts me or I look longingly at people’s reusable coffee cups on the bus I’ll be reminded of why I’m saying NO because of that bigger fight we’re all part of – for women and against sexual exploitation.

Stand in solidarity with women this month by taking part in the #NovemberCampaign Three ways you can support the campaign:
1  Contribute to our crowdfunder to raise £22,000 – we invite you to make a gift of £2.20, £22 or £220 to see our work supporting women thrive. Make a gift towards our crowdfunder here.
2 Say no to something you love to save money or raise sponsorship for our work saying no to Sexual Exploitation. You’ll find a step by step guide to taking part in the campaign here.
3 Show your support on social media. Click save on this image and share it on Twitter, Istagram & Facebook tagging us, using the hashtag – letting your followers know that you say no to sexual exploitation and violence of women past and present.

A blog by Pippa who lives in Hackney, East London and joined Beyond the Streets as a Trustee at the beginning of 2018 having done some volunteering with Beyond the Streets and Door of Hope previously. Pippa works for UK based manufacturing company GKN Aerospace and in her spare time can often be found cycling.