When I first began volunteering with the Beyond The Streets team, a member of staff recommended that I read Rachel Lloyd’s memoir ‘Girls Like Us’. I made a note of it but was in no rush. Little did I anticipate the tour-de-force that would have me devouring the pages, only to eke out the last few chapters to stave off reaching the end. I was humbled; not just by Lloyd’s own harrowing story but her ability to incorporate compelling true narratives with hard facts and statistics about the sex trade. ‘Girls Like Us’ is the perfect balance of head and heart.
Interspersed are accounts of Lloyd’s own troubled childhood. From a somewhat idyllic start with a doting mother, life begins to spiral out of control when the man whom Rachel assumes is her father, comes back into their lives. An abusive and violent alcoholic, Lloyd’s mother also develops a drinking problem in order to cope with his tirades. Young Rachel’s relationship with her mum doesn’t improve with his eventual departure and becomes one characterised by neglect. The daughter assumes the role of guardian, dropping out of school to bring in an income and doing her best to intercept her mother’s attempts to kill herself. 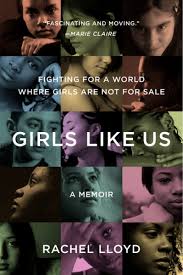 By the time Rachel is living in Germany in her mid-late teens, she has already suffered violent sexual assault at the hands of different men. A perfect storm of straitened circumstances, no means of going back home and those all too willing to exploit a one-time-model’s looks, she lives through a terrifying experience at the mercy of drug-addled and paranoid boyfriends-turned-pimps. Tired of their murderous threats (Lloyd goes as far as making arrangements for her funeral and to inform her colleagues in advance of the likely perpetrator), the last of several suicide attempts proves -thank God- unsuccessful.
Surprised and grateful to still be alive, she wanders through the doors of a church on an American army base and begins the long, ongoing road to recovery. This will lead to her moving to the States and starting her own New York-based project, Girls Education and Mentoring Services (GEMS), supporting young women who have been sexually exploited. She also picks up Bachelors and Masters degrees along the way.
Lloyd boldly takes apart the glamorised images of the sex trade encouraged by some. The author challenges the myths and misperceptions around selling sex as well as the contempt for these girls and women by the authorities and the wider public. Along with others engaged in the battle against sexual exploitation, she is determined to change the lexicon around the subject. ‘Prostitution’ denotes an element of choice that does not reflect the limited agency and complex factors that are at play in the majority of cases, especially for minors. Lloyd is at pains to explain the strong emotional, psychological and even financial ties the girls feel towards those who have exploited them and which makes it even harder to leave for good.
Yet amazingly, the author achieves all this without being sanctimonious. The reader feels better informed rather than sermonised.

‘…One well-known advocate for the sex industry…was actually introduced to the life at the age of 14 after running away from an abusive home. She was a commercially sexually exploited child “trained”…from an early age. Yet because she is not black or Hispanic, because she was not sold on the dark corners of Hunts Point; because she appeared to be on the upper rungs of the “hierarchy” of the sex industry, that much-lauded fantasy world of the escort/call girl, her experience has never been framed as child exploitation or even questioned by the media and general public who continue to enjoy and support the idea that there are some forms of the sex industry that aren’t harmful, that women actually like it, that men’s “participation” in the industry is inevitable and may actually support the women’s career goals. It’s ideas like this that rationalise the continued buying and selling of women and girls…Just because an individual experience has not been difficult, painful or disempowering doesn’t make it true for millions of women and children around the world. The sex industry isn’t about choice; it’s about lack of choices. It’s critical for children and youth, and even many adult women within the sex industry, that we use language that frames it accurately…’ (page 219).
Lloyd’s memoir is essential reading, whether or not you feel a particular connection to the subject. This is a worldwide social epidemic and we would do well to understand its complexities; if nothing else to make us more alert to what might be going on under our noses.
Lloyd’s resilience makers her more than a survivor or even the fitting, but now clichéd, inspiration. She’s a walking miracle and whether or not they realise it, so are all those who have been down a similar path and lived to tell the tale, regardless of where they are in the recovery process. Even those yet to begin.
This blog was contributed by Tola Ositelu, a volunteer, supporter and friend of Beyond the Streets.
‘Girls Like Us’ by Rachel Lloyd. Harper Perennial Edition 2012, Harper Collins Publishers: New York. Buy the book here.